Most RS485 conductors have 4 wires inside.

A typical wiring scheme calls for an IN and an OUT, that means that each run will have a positive, a negative, a common wire, and a ground. The common wire isn't needed here, but the + and - are. Think of A as positive and B as negative. Each in / out has both a positive (A) or a negative (B). 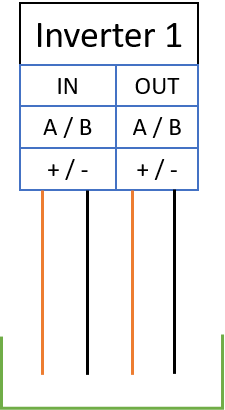 The grounds will pass through the inverters, but they will not be landed inside of the unit. Grounds should be grounded at ONE end only to shield the wire from outside signals.

In the picture, only ONE ground is actually grounded, and it's at the coms box. The rest are just passing through the inverter. Also note the resistor at the end of the RS485 line. The last inverter will always require this.

The last OUT will go to the coms box or datalogger at the end of a chain.